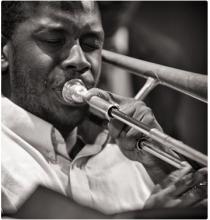 Florida’s best-kept secret, Waldron E. Dunkley II, has unraveled into an infamous musical performer, talented composer, and multi-faceted instrumentalist. And if that wasn’t enough, Waldron’s vast talents have expanded into teaching others how to perfect that wondrous joy known as “playing music”.

Childhood Notes
Although of Bahamian and Jamaican descent via loving parents, Waldron grew up in the sunshine state of Florida. At the early age of 10, he developed an interest in playing instruments while at Scott Lakes Elementary School. During his middle school years, Waldron joined the school band, but it was later, at Miami Central Sr. High School “school of the rockets”, that Waldron truly recognized his talents and fully honed in on his musical capabilities by accepting the position of bass trombone player in the school’s Symphonic Band. Waldron later became 2nd Chair Trombone Player in the All County High School Wind Ensemble, then 1st Chair Trombone in the Jazz Big Band, all while coming into the knowledge that he was onto something much greater than he ever imagined. His parents and three sisters recognized his skill and encouraged him in his musical endeavors. Waldron graduated high school successfully, but not without being awarded the “Louis Armstrong” award in Jazz.

Pursuing the Calling
Merely attending college (BC/Broward College, FAMU/Florida Agricultural and Mechanical University and FSU/Florida State University) and having good grades was not enough for a musical apprentice like Waldron. Similar to legendary greats like Tommy Dorsey and Al Grey, Waldron felt the calling within to be greater than “ordinary”. He was destined to become a musical extraordinaire. Waldron majored in the art of music and obtained an Associates of Music In Performance in 2010 (MDBC), next he earned his Bachelors of Jazz Studies in Performance (FSU), then pressing forward he obtained a Masters in Jazz Studies in Performance (FSU). Under the leadership of studious college professors such as Paul McKee, Brett Dawson, Jason Hainsworth, Rodney Jordan, Bill Kennedy and Leon Anderson, Waldron credits them for their dedication to teaching him well.

The Best Friend of Greatness – Responsibility
Shirking away from responsibility was never a quality of Waldron Dunkley. In fact, Waldron embraced the words leadership, responsibility and discipline. He taught and directed the Jazz Chamber Ensemble and the Jazz Repertoire Ensemble at FSU. He was also a professor of Jazz History (Part 1 & 2) at FSU and often gave private lessons to students in high school and college. Waldron welcomed responsibility as a method of staying humble and giving back to the community.

Popularity of a Musical Extraordinaire
Finding things to do was never an issue for this musical extraordinaire. Through word of mouth, Waldron’s been invited to perform at numerous musical events through his high school and especially his college years. Waldron represented FSU along with the Rodney Jordan Combo in New York City. He also performed with legendary Trumpet Player, Sean Jones, in concert at FSU. Waldron performed with other musical greats such as John Fedchock, Michael Dease, Melton Mustafa, Leon Anderson, Chris Dorsey Sr. Jonathan Blake, Martin Bejerano, Donald Brown and more!
In addition to everything else Waldron has accomplished, he also became a part of the Epsilon lota Chapter of Phi Mu Alpha Music Fraternity while in college. Serving the community by singing songs and playing music in senior living facilities is a joy to Waldron. As a well-known freelancer, his repertoire consist of jazz combos, reggae and soca bands, Junkanoo, small chamber ensembles, r&b and soul performances, brass bands, church performances and singing. As an artist that plays multiple instruments, Waldron found himself to be quite musically versatile.

A Glimpse into Waldron’s Future
Waldron’s humble nature and dynamic characteristics can only lead someone to believe him to be “God fearing”. And if you ask Waldron what his future holds, your answer will no doubt have the word “music” somewhere within because he believes this to be his “God-given talent”. Some folks play because they want to, but just like Mozart, Waldron plays because he has to.